How to spot and avoid mobile money fraudsters

COVID-19: The Battle For Championship For Ghana’s Political Actors

ADVERTISEMENT
ADVERTISEMENT
On the first day of the 7th edition of the AFRICA CEO FORUM taking place in Kigali, distinguished female speakers discussed ways of breaking barriers that are limiting the number of women counterparts on the corporate boards of African companies.
RWANDA, Kigali, March 25th 2019,-/African Media Agency (AMA)/- Under its “Women in Business” initiative, the AFRICA CEO FORUM takes action every year to make the advancement of female leadership a key priority; the forum engages and unites the entire business community around a clear mission: to significantly advance the feminization of top decision-making positions in African companies. 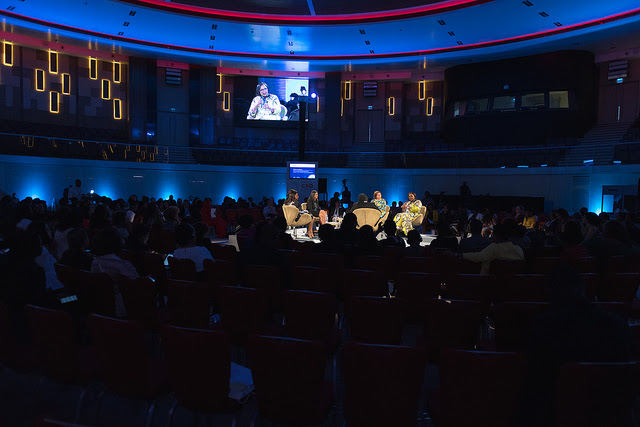 This year’s “Women in Business” initiative was organized in partnership with Globacom and to open the discussion was Bella Disu, the organization’s Executive Vice Chairperson who was the keynote speaker.

She highlighted barriers that currently impede women into making it to corporate boards, citing among the, the absence of laws that promote equal representation of women and men in leadership positions in both in public and private sectors.

“For women to have a shot at joining executive boards, it starts with countries implementing policies which promote gender balance in leadership positions at the work place,” she said.

Jumoke Jagun-Dokunmu, Regional Director of the International Finance Corporation for Eastern Africa suggested that a good way of getting women into management board is by scouting and grooming them from an early stage in their careers, preparing them for the future.

“Scouting talented females and mentoring them improves their chances at being appointed on management boards; this sometimes can start as low as doing pro-bono work but gathering experience and skills required at senior level management,” she noted.

Speaking at the same forum, Fatou Aminata Lo, the representative of UN Women Rwanda said companies that involve women at the very top need to be recognized and lauded as a way of encouraging others.

As an example, she cited an initiative, last year, in which UN Women Rwanda in collaboration with the government of Rwanda rewarded corporate companies that have more women on their boards.

“This is something that can be replicated in other African countries,” she suggested.

Profile of Ini Edo, The Nigerian Actress with over 100 Movies

How to spot and avoid mobile money fraudsters

COVID-19: The Battle For Championship For Ghana’s Political Actors

Importance of IT Support Services For Your Business And What Are The Benefits Of Using Them?

3 Reasons Why Indecisiveness Is Worse Than a Wrong Call

How to Improve Your Alexa Rank

Reducing the Stress of Being an Entrepreneur

From Trasacco Valley to Villaggio Vista Condominium, This Entrepreneur is leading the way in Real Estate in Ghana.

The difference between Business and Entrepreneurship

These Ghanaian Developers are working on a Mobile App that will send you notifications of happenings in your locality.