by Starrfm.com.gh
in News
2 min read

The Ghana Medical Association (GMA) has called on the National Identification Authority (NIA) to immediately suspend the ongoing mass registration exercise in the Eastern region.

A statement by the GMA stated that in the “interest of Public Health and Safety, the GMA calls on the National Identification Authority (NIA) to suspend with immediate effect the ongoing mass registration exercise in the Eastern region.”

According to the GMA, the decision to proceed with the mass registration exercise defeats the spirit and letter of the directives issued by the President as part of measures to combat the COVID-19 spread in the country. 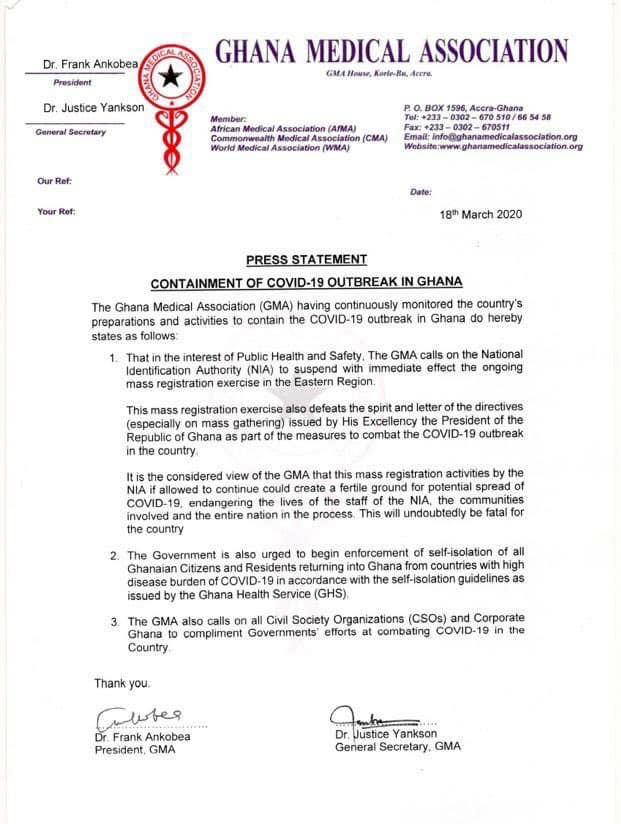 Though the National Identification Authority, on Monday, March 16, 2020, directed all Supervising Registration Officers (SROs) to allow only twenty-five (25) persons including its officials at a registration center in a given time, Starr News observation in most of the centers in the region indicate that the directive is not being adhered too.

Again, there are no handwashing facilities and sanitizers available for both applicants and registration officials to use exposing them to high risk of being infected. One of the officials reported that efforts to provide face shield with glasses to the employees were underway but so far, hadn’t received any information regarding the same.

The opposition National Democratic Congress on Tuesday also called on the NIA to stop the mass registration exercise in the Eastern region in order to protect applicants from the spread of coronavirus.

According to the NDC, the continuation of the registration exercise is a slap in the face of the directive issued by President Akufo-Addo which suspended all public gatherings with numbers above 25.

The measures were announced by the President to slow the spread of the Coronavirus that has killed over 8,000 people and has infected 200, 000 people globally.

Ghana has so far recorded seven cases of the Coronavirus with more cases expected according to the Ghana Health Service.

In the midst of the COVID-19: The Prison Officer still Reforms!

Ghanaian Environmentalist receives another Appointment as a Panel Member of International Experts on the Environment of Peace 2022 (EP2022) project.

If You Could Step on other’s toes just to get likes on social media, You are pathetic

Time with Chibeze Ezekiel, First Ghanaian to join the Board of 350.org (Video)

Causes of Saggy Breasts and How to Deal With Them

There Are 13 Black Billionaires Around the World, Checkout the List!

Why “Hustle” Is Essential For Success As An Entrepreneur

Watch this short video of how Louisa Amoah is impacting the lives of young girls in Ghana.